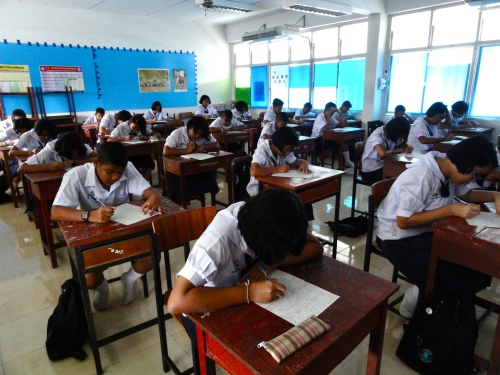 So it’s officially the penultimate day of exam week here at Satree Thung Song School. This means, as you may have been able to ascertain from the fact that this is my third post in the same week, that I have not been too busy. Yesterday I was finally provided with some school-related work in the form of a hundred-some poems from my M5 students (which I was thankful for, since it relieved me from having to spend an hour learning a dance to “Itsy Bitsy Teenie Weenie Yellow Polka Dot Bikini.” I did, however, have to spend an hour listening to it on repeat while the others learned; and I will, however, have to learn the dance by Friday, when I will take part in performing it for our end-of-year staff event. Definitely looking forward to that one.)

I just finished testing my babies (pictured above), which is effectively my last contact with the students here, aside from accepting poems from the M4s tomorrow. I know it’s trite to say this about every milestone that indicates that time has passed, but it really is hard to believe the whole five-month term is over! But I thought I’d end on another point of humor.

First, at the end of my final actual teaching period last Friday, I came across an anonymous notebook in the back of the class. I opened it and found it was an English notebook. “Oh no!” I thought to myself. “How will he be able to study?” I flipped through and found that, for better or worse, he’d taken no notes that would be pertinent to the test so decided not to trouble myself with tracking down the student. But I also saw that on a few occasions he’d taken the liberty of writing complimentary notes to himself– from me! Twice for classes in which I wasn’t even teaching (I’d gone home for the wedding and Cian was subbing), and always with creative liberty with the spelling of my name.

must've been channeling the 10th grade me, back when i was 'annjellah' 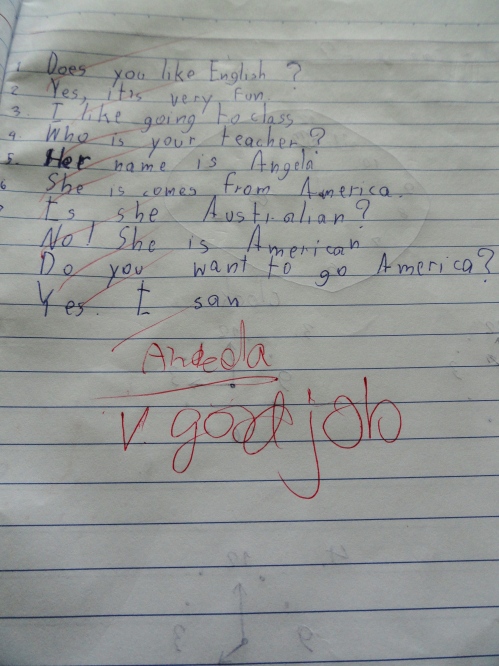 in my/his defense, i'd written a bunch of incorrect sentences on the board that they were meant to correct. he must have gotten confused/distracted a few times.

So there’s that. Then there’s the idiom hilarity. I’d been teaching my older classes an idiom a day, to the delight of some and the chagrin of others. As a culminating activity I gave them a five-point extra credit assignment where they had to match idioms to meanings on one side, and then ‘write a short story’ on the other side that would show me they understood the meaning. Most students just wrote verbatim the short examples I’d given in class. Others, thinking they were being clever, tried to change subtle details to hide the fact they weren’t putting in a ton of effort. Often this resulted in incorrectness, such as, “I hate going shopping with my grandfather! She’s such a penny pincher!” or “She has a nice pen! I have no pen! I’m red with envy!” Some had clearly found an idiom dictionary online and were just drawing from there, which was fine, except they weren’t always paying attention and I ended up with things like, “rooms wasn’t built in a day.”

But there were some that felt up to the challenge and the results were giggle-worthy, at the very least. A few of these went up on Facebook but they bear repeating.

So I suppose here it’s worth mentioning that I started this post yesterday, and was interrupted by an “invitation” to come practice the “Itsy Bitsy Teenie Weenie” dance. Which I understood to be less of an invitation and more of a, “You got out of it yesterday, but we really expect you to come practice with us today.” Oh you sneaky Thai doublespeakers! I’m onto you. Guess I really put my foot in my mouth on that one!

Anyway, that makes today the last day of tests and hopefully soon-to-be last day of grading for me… yet we’re still required to come to work for the next two weeks? Oh well. And just on a closing note, I’m sure all the children have done exceptionally well on their finals. After all, I walked into a classroom this little foolproof study-advice tidbit still brandished on the board from the previous class:

I'm not actually a sleeping monk (though if I had my druthers...).
View all posts by Angela →
This entry was posted in Thung Song and tagged finals, idioms, satree thung song, school, studying, thailand, thung song. Bookmark the permalink.

1 Response to Satree Winds Down