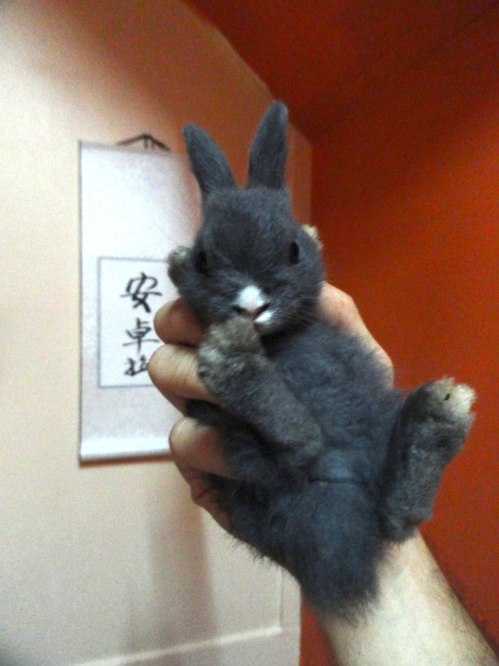 So the last post was in a humorous vein, and, God-willing, so will the next, but unfortunately today I bring you bad tidings. The title may seem like a catchy Thai rhyme, but it means “sick rabbit,” and was the name of the game Sunday morning. Like any child of the 90s, I watched The Lion King. In theaters, on or around Thanksgiving, I believe. I cried when Mufasa died, but I also clung tightly to the idea of the circle of life. I mean, it moves us all right?

Alas, now, well over a decade later, I’m struggling a bit with the concept. I won’t go into the details (Wayne finding Jinx lying limp in her box Sunday morning, me desperately giving her water from a syringe, holding her gingerly in my hands as we flew around town trying to find an open vet [it took three attempts], her occasional spasms, the singular scream, realizing during the 10 minute wait at the vet’s office that she’d gone completely stiff and had died in my very hands), but our dear, darling, tiny Jinx proved to be a very  temporary addition to the household. She seemed in great shape on Saturday (most of the footage at the end of the video is from then), but something drastic must have happened in the nighttime hours.

trix is not a good space-sharer

The vet (as he waved her dead body haphazardly around) told us we shouldn’t have been feeding her vegetables– that baby rabbits should only eat rabbit food pellets (just like they would in the wild, of course). Trix hasn’t eaten a pellet since leaving the pet shop and she couldn’t have been much older than Jinx so this has us a bit dubious, but I guess we can’t really say. The vet returned her to me (only at my prompting) and we went and buried her in the field opposite our house. Definitely not the way we were expecting to start our Sunday :(. 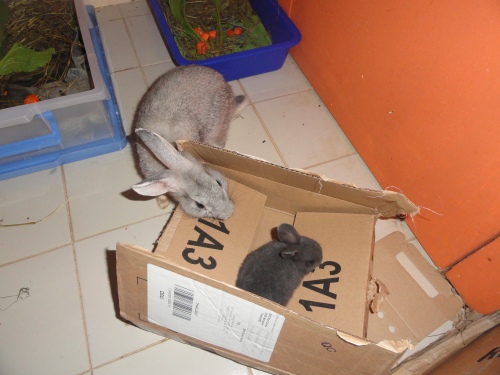 I know it’s probably a bit silly for me to get so bummed out about a rabbit, especially one that I’d only had for a week, but the whole ordeal has got me quite melancholy. In a way she was so small and helpless, but at the same time super feisty and totally held her own against the two big bullies she lived with (that is, Trix and Ollie… not Wayne and myself haha). I’d found myself wondering how her markings (that cute white patch on her nose!) would change as she grew up, and I was excited for her and Trix to eventually become real friends and play. We’d (read: I’d) even planned what she was going to be for Halloween! (A ghost… as it turns out… Ay, ye cruel twists of fate!)

So anyway, the family unit’s back down to four. Trix and Ollie don’t seem too affected by her absence. For all we know they’d conspired against her. Rest in peace little Jinxy. I’ll miss coming home and seeing you sitting in your box like a good little bunny. I’m sorry I never made you a nameplate like Trix’, and doubly sorry if anything I fed you killed you. (And while I’m genuinely sad about all this and not really trying to be ironic, don’t think the… borderline humor of my video-with-highly-emotive-music and super-sappy-poem [after the jump] is lost on me. But I’m a wannabe artist and this is how I choose to mourn.)

trix was raised on vegetables and grass,
and she grew up to be a healthy lass.
though we were warned, “they’re better as a pair!”
get another one– we didn’t dare.
until along came ollie one wet day
(it wasn’t in the plan, but anyway…).
a puppy for the family sounded sweet.
but aren’t rabbits something puppies eat?
and won’t that be a problem when he’s grown?
perhaps– but there was nothing to be done.
but instinct isn’t something you can fix
and companionship was not embraced by trix.
though he rarely treated her as food,
the friendship wasn’t something she pursued.
she seemed so lonely, so we had a thought.
with hesitation, said, “give it a shot…”
(especially priced at only roi ha baht,
we couldn’t help but ask ourselves, “why not?”)

so jinx was raised on grass and vegetable,
but for her things didn’t fare so well.
neither was she a friend that trix would seek
(though she’d warmed up in just under a week).
she was small but quick, and so she held her own.
we couldn’t help imagining when she was grown.
but such things were not to come to pass.
though trix grew up to be a healthy lass,
we woke the morning of one week together
and found jinx’ links to life had loosed their tether.
i cradled her on our way to the vet,
but by that time, alas, it was too late.
she’d screamed and spasmed; stiffened in my hand.
a sad and sudden way for it to end.
so small and fragile– she just couldn’t last.
in our house, fated to be just a guest.
white nose, small frame no larger than my wrist.
in our lives such short time but she’ll be missed.
now becoming dirt beneath a tree
where cows will graze as she sleeps peacefully.
don’t give your rabbit an unlucky name,
for when she dies, your house won’t be the same.

I'm not actually a sleeping monk (though if I had my druthers...).
View all posts by Angela →
This entry was posted in Thung Song and tagged funeral, jinx, rabbit, sad, thailand, thung song, vet. Bookmark the permalink.